Closing Out with Urgency

The #1 key to closing out is knowing who you are closing out to. Many times players just focus in on who they will be guarding in the scouting report. However, through the course of the game it is possible that they could end of guarding any position 1-5 after scrambling/rotating on defense. For this reason, it is essential that every single player on your team knows each player on the scouting report. Are you closing out to a shooter, a player prone to shot fakes and penetration, non shooter, etc?

Closing out is a special technique that requires several actions to occur simultaneously in order to be effective.

1. Squeaky feet: When closing out, it is essential to have squeaky shoes/choppy feet. Closing out flat-footed and/or landing on both feet by lunging out to the offense will leave you standing in concrete and punish the rest of your team on defense. By chopping your feet/squeaking your shoes, this ensures that you will be on your toes and ready to move in any direction.

2. High Hand(s): As you are closing out and chopping your feet, you also need to have your hand(s) high. Some coaches prefer both hands while others prefer one hand high to prevent an uncontested shot and one hand lower to get a hand in the pass lane. While you need to have a guideline, I think it is what is most comfortable for the player. If he/she does not feel as “athletic” closing out with both hands high, let them close out with one hand high.

In my opinion, as long as you effectively contest every shot that is a success.

3. Butt Down: We all know that the lower you are in basketball (on offense & defense) the more effective/quicker you will be. As you are chopping your feet and throwing your hands up, your butt should be dropping to the floor.

4. Chest Out: Chopping your feet, getting your hands high, and getting your butt down are great, but those three pieces are useless unless your chest is sticking out (up in athletic position). You don’t want to close out bent over…occupy as much space as possible!

5. Closeout Length: A very common question players ask, “How far do I close out to my man”? This all depends on the player, I typically teach that you should be no more than an arm’s length away from your man. Meaning, if you are standing in front of your man and put your arm out, just your finger tips should be grazing their jersey. This will give you enough space to prevent getting blown by, while being close enough to contest a shot without fouling. Your players may then say, “But coach, he CAN’T shoot”. While this is true and I do agree with sagging a little off of a Shaq type player who is 15+ feet from the rim, you never want to leave someone completely wide open to shoot or have open passing lanes.

Additionally, if your man is beyond the 3-point, I teach keeping your heals on the 3-point line. In today’s game there are not very many “pure” shooters who have extreme depth. However, if you are playing against a Stephen Curry type player, then you should adjust this space accordingly.

Below are a couple of drills that help teach the necessity of closing out with an urgency.

Start the drill by placing all 5 players around the perimeter and give them a ball, place their defender in the lane.

On the first whistle have the defense start foot-fire (i.e.-quick feet, choppy feet, etc). On the second whistle have them closeout to their man yelling “BALL, BALL, BALL…”. Have your offensive players  perform several of the progressions below:

1. Move the ball around and make the defense trace the ball with their hands.
2. Jab step forward, left, and right and make sure the defense is adjusting their stance’s accordingly.
3. Shot fake. Have the defense yell “SHOT” and have them turn and Box Out.
4. Allow the offense to take ONE dribble either left or right (More than one dribble could cause players to run into each other)
5. Add all five together.

Once everyone has been on offense and defense, take the balls away from every offensive player so only a coach has the ball. It is very unusual that you closeout on defense in a controlled manner, so lets add some movement. The defensive players will now slide in an athletics stance around the perimeter of the lane pointing to their man  and communicating verbally by saying “I have Mike, I have Dan, I have Nick…” each time they move in front of a new man. If only one player fails to communicate or point, start the drill over.

Once they have circled once or twice (or you are satisfied with their communication), have the coach throw the ball to any of the 5 offensive players on the court and have your players close out accordingly (getting into the proper help-side defense). Have the offense pass the ball around holding onto the ball for at least 3 seconds to allow the defense to fully rotate properly.

Once everyone has been on offense and defense, make the drill Live. I would recommend placing about 20 seconds up on the clock for each possession. The defense has to get five CONSECUTIVE stops (No points or fouls) in order to get on offense.  Additionally, if you are not satisfied with their effort, start the drill over. To make it competitive, make the loser run a suicide or similar running exercise.

Place an offensive player on each wing and one at the top of the key, two defenders in the lane in a tandem, and have a Coach with a ball.

When the coach pounds the ball into the floor (a hard dribble) or blows their whistle the defense starts foot fire. The coach then passes to one of the three offensive players. Any pass to the wing is taken by the bottom defender as the top defender sinks to fill the lane.

The offense should pass every 3 seconds (NO DRIBBLING OR CUTS BY OFFENSE). 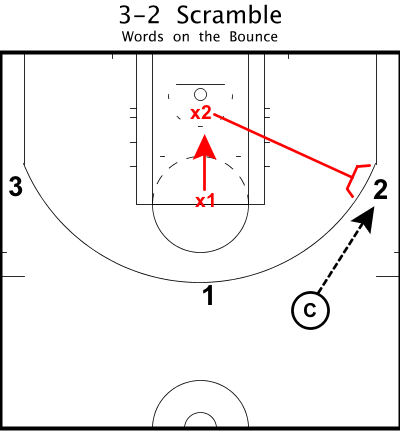 Once everyone has been on defense, add one more offensive and defensive player to create a “4-3 Scramble”. Have the offense pass the ball around (holding for three seconds). Then give each player 2-3 dribbles to practice help & recover situations. Note: when a player is more than one pass away they are not allowed to basket cut.

There are many drills to use to practice closing out on defense but these are two of my favorites that I think are the most effective.