One question I am frequently asked, “How do I come up with the play calls that I use for my plays?”. Until now, I have never taken the time to explain why I name certain actions the way I do. This was until I watched Stan Van Gundy’s lecture at the 2013 Coaching U Live and I became inspired to break it all down for you. However, before I dive into the names of particular actions to signal play calls, let’s discuss many of the most commonly run schemes in basketball.

Flex is probably the most known and run offenses in all of basketball. Why? Because it is extremely effective if not guarded correctly. Furthermore, it is a repetitive offense that if you can lull the defense to sleep, will result in lay-ups. Flex actions are designated by running a backscreen/downscreen action. If you want to be creative you can move your wings higher and set traditional backscreens to give more space/time to get open at the rim.

UCLA actions are defined as a cut off the high post after making a pass to the wing. You can read more about the difference between a UCLA cut and a Hawk cut here.

Zipper cuts are unique because they can effectively be executed in the half-court and sideline out-of-bounds. A zipper cut is a lane line cut using a pin-down from the elbow (similar to a zipper going up and down, hence, Zipper). See every zipper action I’ve drawn up in my play library here.

Horns, or V, is one of the most widely used pick & roll actions used world-wide in the game of basketball. Horns is designated with having two players (usually bigs), one at each elbow/slot area to set a pick. The ball-handler then has the option to choose which pick to use. See every horns action I’ve drawn up in my play library here.

Elevator plays, which are also referred to as “gates” or “closing doors” are actions in which a shooter cuts through two screens. As soon as the cutter passes through the screens, the screeners close the gap shoulder to shoulder. See every elevator action I’ve drawn up in my play library here.

Floppy actions are not as common at the high school and collegiate level, but they are run night in and night out in the NBA. Essentially a single-double action, the NBA commonly refers to it as a Floppy. A floppy is set up by having two guards in the paint and two bigs just outside the lane ready to set screens. Typically one player is designated as the “hot hand” to use the first screen(s). This player has the option to use either the single or the double. The 2nd guard then cuts the opposite direction of the first cutter. See every floppy action I’ve drawn up in my play library here. 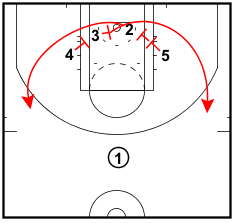 Stay tuned for Part 2 of this conversion where I will start to break down how I choose the actual names for my play calls!