This play is a short three frame diagram that illustrates the Florida Gators pick & roll motion offense from Billy Donovan.

To see EVERY play Florida ran in the 2014 Final Four you can do so in my eBook Championship Execution!

Last week I wrote about screening angles and how they can lead to a more efficient offense. Today I wanted to take some time and just discuss some of the options available to attack several different pick & roll coverages. At the youth and high school levels, very seldom do I see a team that will throw different types of pick & roll defenses throughout a game; usually a team will either switch, go under, or trap and do that the entire game. In contrast at the collegiate and professional ranks, teams will handle pick & rolls differently depending on multiple factors:

All of those factors will determine how the rest of your defense rotates and guards these situations. In an effort to keep this simple I am going to break down six ways to handle different pick & roll coverages.

These techniques are widely used in the NBA and have recently trickled down into the collegiate game more and more each year. If you are battling a team that is very aggressive and likes to hard hedge/blitz/trap pick & rolls this is a great technique to combat that. As the screener (5) sprints into the pick & roll, if 5 feels the defense is jumping out hard, quickly change the angle of the screen and get your guard going downhill in a 4 on 3 situation. 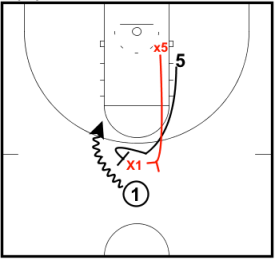 The Step-Up technique is most popular in the NBA because most teams prefer to Ice/Blue side pick & rolls to keep the ball out of the middle. Furthermore, the coverage is usually called out early and loud enough for the offense to hear. As 5 sprints into the side pick & roll, if he sees X1 get on the topside of 1 to force down and X5 get on the low side, he knows to change the angle to a Step-Up and get the guard going straight downhill at the defense. Few bigs have the foot speed to stay in front so they are just there to hold until X1 can recover. As X1 recovers and X5 holds (If 1 cannot get to the rim), roll the screener (5) to the elbow area for a throwback and look to attack.